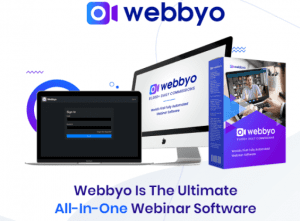 Done-For-You Upgrade Automates $238 Commissions
For You From Every Visitor You Get!

Create Webinars In Other Languages, Get #1
Rankings And Send Unlimited Emails With our
FANTASTIC Software Bundle Offer!

Webbyo Is The Ultimate – All-In-One Webinar Software
It lets you run webinars with unlimited attendees – both live AND recorded ones, then it gets you done-for-you traffic for free & even ready-made products to promote.
Webinars and online meetings are all the rage right now – Zoom has over 300 million users. Let your customers tap into the power of webinars WITHOUT having to pay monthly fees, create products or even go live themselves.
We’re Literally Handing Over The FULL Benefits
Of Webinars While Removing 100% Of The Obstacles
Here Are Just A Few Of Our Top Features
Cloud Based Webinar Software With Unlimited Attendees
Run live or pre-recorded webinars, complete with sign up pages, replays and live pages (just like a regular $500/mo. GTW subscription)
DFY Products & Webinars
Just activate one of our DFY webinars, insert your affiliate link and be on your way to $1,000+ commissions without doing any work.
Free Traffic Built-In
Livestream your webinar at the SAME TIME to Youtube, Facebook, Vimeo, DailyMotion and more for guaranteed easy traffic.
World’s Best Video Editor & Webinar Creator
Forget about creating your own webinar, offer and then going live – our incredible creator module lets you livestream any video as a webinar and edit it to promote any offer you like.
Email Autoresponder Reminders
Guess what – any time someone signs up to a webinar (live, prerecorded, ANYTHING) they get automated reminders from Webbyo making sure they join live & buy the offer.
So you get to build your list and promote to it too all within the same platform.
+ Many, Many More – This Is A Software Unlike Any Other
First, we’ve included every possible angle to make it valuable for your users and
easy for you to sell. Then, we’ve removed all possible objections.